Wood engraver and painter, born at Leek, Staffordshire. He studied at the Royal College of Art, 1905-08, and went on to become principal of both Leicester College of Art and Blackheath School of Art. He won a gold medal at the International Print Makers' Exhibition, 1922. He exhibited at the RA, NEAC, RE and with the British Council. During World War II he was an Official War Artist. His work is held by the British Museum, Imperial War Museum, Victoria and Albert Museum and the Tate. He wrote for a number of publications including The Studio and The Artist and produced several books on the art of the colour woodcut.

He worked equally successfully in oil, watercolour and wood engraving, usually confining himself to a small scale; he often worked en plein air, a method he successfully employed to respond directly to his subject. His panels are frequently annotated with notes about the weather and light conditions. 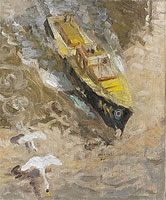