To launch our Hidden Gem series Liss Llewellyn are delighted to present a group of works based around the theme of the nude. These works have been assembled from estates and private collections, and have not been previously shown on-line.

The Nude is one of the oldest visual traditions in Western Art, and many of the works in this collection inevitably reference Classical and Renaissance models. For example, John Cecil Stephenson's Perseus and Andromeda recalls the heroic tradition of nudity in Grecian Art and the slate-carving of John McKenzie (Harvest Chat) connects with the art of  shallow relief as perfected in Antiquity. The metalpoint of William Strang (Seated Nude) recalls a technique in which Renaissance artists da Vinci, Raphael, and Dürer were unrivaled, while the paintings of Charles Sims and Francis Plummer similarly connect with the Quattrocento technique of egg tempera. And then there are those that subvert the idealised forms of male and female beauty, as in Allan Milner's collage of body parts (Domestic Chores), or Douglas Percy Bliss's playful caricatures that reference the salacious exploits of Gauguin in Tahiti. These sixteen different treatments of nudity illustrate the ways in which the theme has, and still continues to be, a powerful arena for creative expression.

About this subject
2 pictures 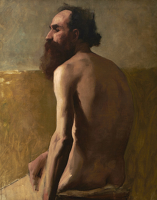