Painter of landscapes, townscapes, flowers and some portraits in oil. He was born in Glasgow in 1873 and studied painting at the Glasgow School of Art, where he won a scholarship to Paris in 1898. There he met many Impressionist painters, and perfected the wet-in-wet painting technique which he was to use to great effect for the rest of his life. He held a solo exhibition at the Carfax Gallery in 1912 and subsequently exhibited in London, the provinces, at the ROI (member 1927) and at the RA. He also showed in Europe and is represented in public collections including the Tate Gallery and the Louvre. He made many visits to France and in 1911 went to Spain. During World War I he served with the 10th York and Lancaster Regiment as a Quarter-Master, serving in France from 1915 to 1918. He lived in Buckinghamshire and painted many of its landscapes. He was married to the artist Gertrude Macdonald, known as Biddy. 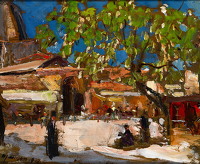 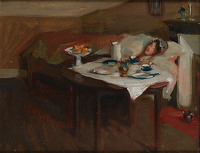