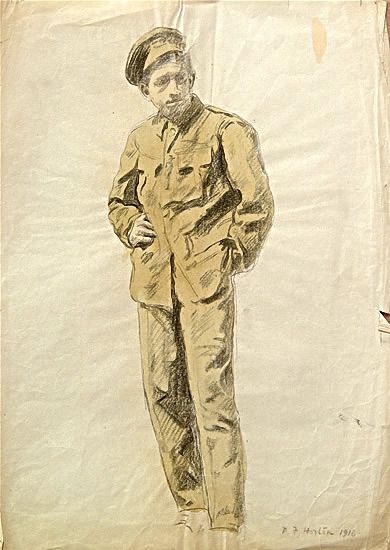 Percy Horton’s training as an artist was interrupted by two years’  imprisonment as a conscientious objector during the First World War ; he was sentenced to hard labour for refusal to wear his uniform. Until the end of July 1916 he was under arrest at the depot of his regiment – the Royal Fusiliers 29th Division – at Chichester . On 1 August he arrived in Edinburgh, where he was committed to Calton Jail, initially for thirteen weeks’ solitary confinement.

The First World War had had a profound effect on the Horton family: Percy’s
brother Harry was gassed, wounded and shell-shocked in the course of his
service in Italy and France with theWest Kent Regiment.

At the end of 1917, writing to his father from Edinburgh Royal Infirmary, he observed: ‘my portraits are very popular . Everyone wants to have one and they pose so patiently. ’ Horton seems to have been deprived of paper and pencil on his arrival in Edinburgh, and it seems likely that this sketch was made while the regiment was still at Chichester .