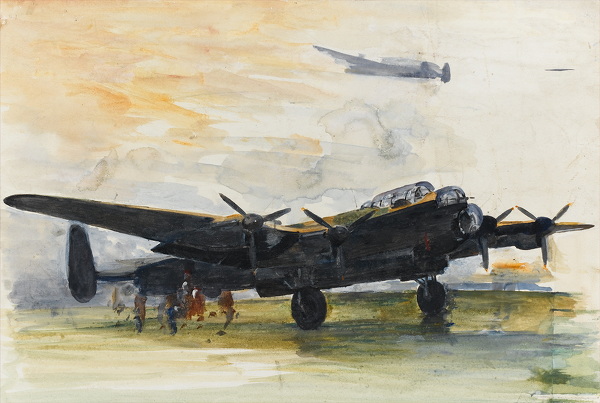 As an official war artist with the Royal Navy and the Royal Air Force, (Captain)Charles Cundall produced some of the most memorable images of the Second World War, not least his epic Withdrawal from Dunkirk 1940
(Imperial War Museum).

The most famous British bomber of the war, the Lancaster, flew on many
famous sorties: the Dambuster’s Raid, the daylight raid on Augsburg and the
sinking of the German battleship Tirpitz. Forming the backbone of the British
bombing offensive, Lancasters inflicted decisive and crippling damage on
enemy factories and installations. The bottom of the fuselage was painted
black to avoid detection during night-time bombing raids. The Lancaster was operational from March 1942; during the war years 7,377 of these aircraft were built.

We are grateful to Andrew Cormack and Peter Till for assistance.