This is a sketch for Coastal Operational Training Unit (RAF Museum, Hendon). When the finished painting was exhibited at the Royal Academy in 1943, it was titled O.C.T.U. Station. Painted for the Nation’s War Records, no. 59. The setting (not indicated at the time for security reasons) is Limavady, Northern Ireland. 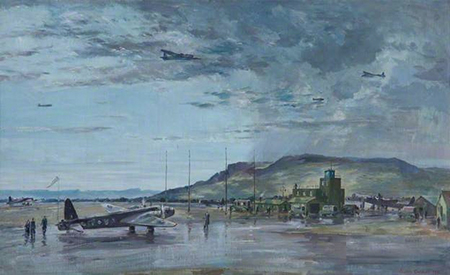 The painting shows Wellington bombers, the revolutionary (geodetic) aeroplane designed by Barnes Wallis in 1933; the Wellington MK II, introduced into service in 1940, was, according to the RAF Handbook, ‘a remarkably fine bomber … used extensively on night bombing raids on enemy targets, including those in Italy’ (Eric Sargent, circa 1941).