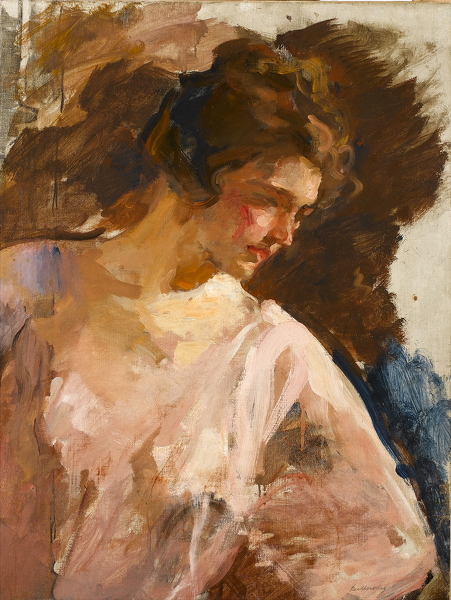 Provenance: The Artist's own collection

The portraiture of Albert de Belleroche is an interesting aspect of his work, for being of independent means, he was far more selective in terms of the sitters that he portrayed.

Belleroche did not enter into commercialism with his art, nor seek commissions, or pursue representation with dealers. The results were sometimes cronyistic, as Belleroche would depict close friends and influencers within his social circle, as in his portraits of Sargent, or the large oil sketches of Emile Zola’s funeral procession (private collection). On other occasions, these works were more idiosyncratic, and recorded figures of the time such as the Japanese wrestler,Taro Miyake, who popularised Judo across Europe. More frequently however, he was able to capture the doyenne of le Tout-Paris, and immortalise their beauty in unrivalled terms. This picture is one such example.

A.M. Hind would later write that ‘the lack of necessity for the sale of his works and a reluctance to seek for portrait commissions, in spite of his special faculty in portrait painting, may have lost him immediate repute, but his industry and single-minded devotion to his art, combined with a rare sensibility, will assure his later fame.’

The picture comes in a Watts frame.