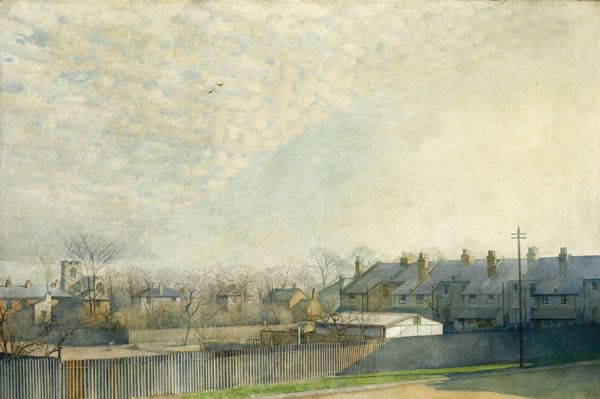 Bush lived at 19 Queensland Avenue, Merton Park, SW19, in a custom-built house with an extra storey for his studio. Bush saw the ancestry of his art in the quiet dignity of Dutch and Flemish domestic scenes, and, as his younger daughter recalled, mixed pigments and oils, 'so that his work should mellow, glow and last, and if possible, improve' (The Art of the Garden, Tate, 2004, p. 85). Most of his twenty-seven Royal Academy exhibits (1922-54) were based on local subjects, earning him the epithet 'Painter of the Suburbs'. Amongst this series are some of the most beautiful, if understated, images of suburban London between the wars. An almost identical painting by Bush was included in the recent Tate Britain show The Art of the Garden (illustrated on page 85 of the catalogue, fig. 47).