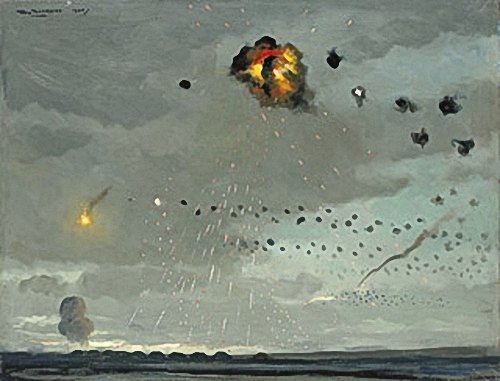 Literature: WW2 - War Pictures by British Artists, Edited by Sacha Llewellyn & Paul Liss, July 2016, cat 159, page 199.
In June 1944 the first flying bombs fell on London; they were usually called 'buzz-bombs' or 'doodle-bugs'. This historically important, dramatic skyscape, recording the arrival of buzz-bombs in Britain, depicts most probably the landscape of Kent - buzz-bombs were launched from Northern France. Propelled by pulse engines (indicated by the intermittent black puffs of smoke), buzz-bombs flew at 400 mph. This unprecedented speed rendered artillery fire largely ineffective so, rather than being directed, artillery was sent up as a wall of fire. Buzz-bombs announced the dawn of a new form of warfare. To combat their speed the Meteor fighter jet was developed, leading to the technological revolution that would, eventually, take man to the moon.

During the war Nockolds not only served in the RAF but developed for them a revolutionary camouflage for Mosquitoes. Whilst most artists chose as their subjects the almost picturesque aftermath of bomb damage (The Ministry of Home Security published an entire volume of pictures of bomb damage, under the title Blitz, 1942), Nockolds engaged with the technology of war. Stalking the Night Raider and Three Spitfires attacking a formation of Junkers (Imperial War Museum) are among the most atmospheric paintings of aerial combat produced during the War.

We are grateful to John Monnington for his assistance.